As of 1 January 2019, US operable atmospheric crude oil distillation capacity was a record-high 18.8 million barrels per calendar day (b/cd), an increase of 1.1% since the beginning of 2018, according to EIA’s annual Refinery Capacity Report. The previous high of 18.6 million b/cd was set at the beginning of 1981. US annual operable crude oil distillation unit (CDU) capacity has increased slightly in six of the past seven years. Operable capacity includes both idle and operating capacity. 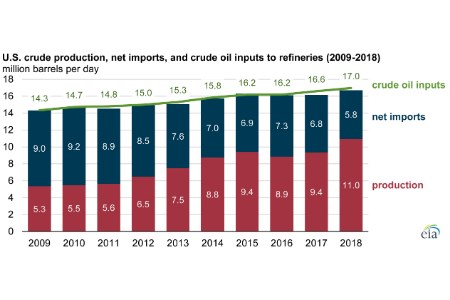 Barrels per stream day reflect the maximum number of barrels of input that a distillation facility can process within a 24-hour period when running at full capacity under optimal crude oil and product slate conditions with no allowance for downtime. Stream day capacity is typically about 6% higher than calendar day capacity.

Targa Resources started up a new condensate splitter in Channelview, Texas, in 2019 that was idle at the start of the year but began operating during the first quarter. Suncor Energy split its reporting of the Commerce City East and West plants in Colorado.

Marathon Petroleum Corp. acquired 10 refineries from Andeavor in 2018, making it the largest refiner in the United States. Marathon’s refineries collectively have an operable capacity of slightly more than 3.0 million b/cd, 16% of total US refining capacity and about 800 000 b/cd more capacity than the second-largest refiner, Valero Energy Corp.

EIA’s Refinery Capacity Report also includes information on capacity expansions planned for 2019. Based on information reported to EIA in the most recent update, US refining capacity will not expand significantly during 2019. A 21 June fire at the 335 000 b/cd capacity Philadelphia Energy Solutions refinery complex, the largest refinery on the East Coast, has resulted in its announced closure.

Further investment in US refinery expansion projects depends on expectations about crude oil price spreads, the characteristics of the crude oils produced, product specifications, and the relative economic advantage of the US refining fleet compared with refineries in the rest of the world.

Read the article online at: https://www.hydrocarbonengineering.com/refining/28062019/us-refinery-capacity-reached-record-high-at-the-start-of-2019/