The US Energy Information Administration (EIA) has reported that US exports of total petroleum products set a record high in 2018, reaching an annual average of 5.6 million bpd, an increase of 366 000 bpd from 2017 levels. The three largest petroleum product exports from the United States in 2018 were distillate, propane, and motor gasoline. US exports of motor gasoline (including blending components) and propane reached record highs in 2018, and exports of distillate reached their second-highest volume on record, following the high set in 2017. 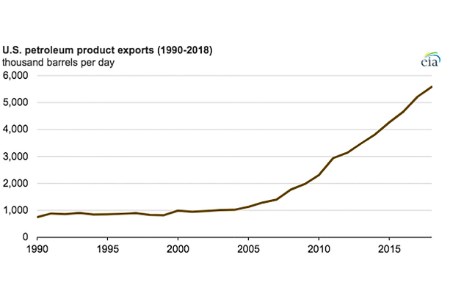 As US crude oil production increased over the past decade, gross inputs into refineries also increased. Petroleum products can be used domestically, exported, or put into inventory. In 2018, record-high levels of US crude oil production and refinery runs helped refiners export large volumes of petroleum products, even with high levels of domestic demand.

Despite an 80 000 bpd decrease in exports in 2018 from 2017, distillate remained the most exported petroleum product in 2018, averaging 1.3 million bpd, or approximately 25% of US refinery net production. Distillate exports were still more than 100 000 bpd higher than the previous five-year average (2013–2017). The United States exported distillate to 64 destinations in 2018, with the largest volumes destined for Mexico.

US propane exports reached a record high of 972 000 bpd in 2018, surpassing the previous record of 914 000 bpd set in 2017. Propane exports in 2018 were greater than motor gasoline exports for the third consecutive year, and propane remained the second-largest US petroleum product export. Unlike other US petroleum product exports, which tend to stay in the Western Hemisphere, significant volumes of US propane often reach Asian markets. Three of the top five destinations are in Asia. Propane is used in many Asian countries as a feedstock for producing ethylene and propylene, which are building blocks for chemical and plastic manufacturing.

US exports of motor gasoline (including blending components) reached 44 destinations in 2018 and set a record high of 951 000 bpd, up 126 000 bpd from 2017 levels. This increase in exports came despite high levels of domestic gasoline consumption, averaging 9.3 million bpd in 2018, only slightly lower than the record-high level set in 2017.

Read the article online at: https://www.hydrocarbonengineering.com/refining/24042019/record-us-petroleum-product-exports-in-2018/