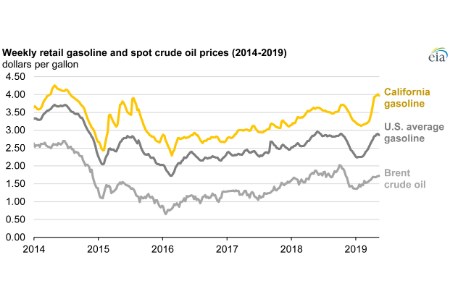 Beginning in March 2019, gross refinery inputs in the West Coast (the Petroleum Administration for Defense District (PADD) that includes California) began to rapidly decline. By mid-April, the four-week average of regional refinery runs reached 2.37 million bpd, a rate 9% lower than the previous five-year average. Weekly refinery runs have increased slightly since mid-April, possibly indicating that some refineries in the region are returning to operation.

Planned refinery outages typically do not drive large price increases, but unplanned outages can, especially in tightly balanced markets such as the West Coast. According to trade press reports, unplanned outages in the West Coast region include a shutdown in March as a result of emissions issues at a Valero refinery in Benicia, California, and shutdowns in March and in May as a result of two separate fires at a Phillips 66 refinery in Carson, California.

The West Coast is isolated by both geography and a lack of petroleum infrastructure connections to the rest of the United States. In addition, California requires a different gasoline specification than the rest of the country, further narrowing resupply options. These restrictions mean that after drawing down in-region inventories, the next available resupply is through imports from refineries in Asia or Europe.

For the week of 3 May 2019, the four-week rolling average of West Coast imports of total gasoline reached 120 000 bpd, the highest level since EIA began tracking this data in May 2008. This method of resupply is costly, and wholesale prices in the region have increased to cover these associated costs.

Read the article online at: https://www.hydrocarbonengineering.com/refining/23052019/eia-reports-on-california-gasoline-price-increases/