Total has inaugurated new units at its Antwerp, Belgium, integrated refining and petrochemicals platform. The unit shave been progressively started up over the last few months. This event marks the completion of the upgrade programme launched in 2013. The company has invested more than €1 billion to improve the competitiveness of this major site, located in the heart of Europe's main markets. 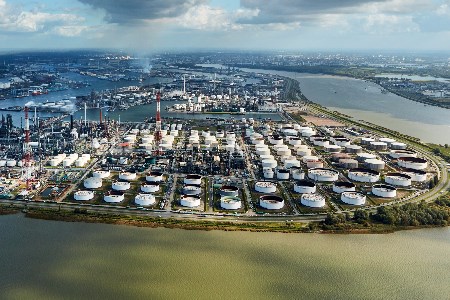 Firstly, an investment in a new refining complex was approved for the conversion of more heavy fuel oil into low-sulfur light products. A deasphalting unit and a hydrocracker were built to increase the production of clean and high-value-added products and the new refining complex will reduce the high-sulfur heavy fuel oil yield, in anticipation of the new marine fuel regulation that will take effect in 2020.

Secondly, steam cracker flexibility has been increased to maximise the processing of low cost advantaged feedstock. A new unit was built to convert rich gases produced by the refinery into cracker feedstock, and one of the two steam crackers and site logistics have been adapted to import and process ethane.

Total also announced a logistics project last August to connect the platform to the neighbouring storage terminal via a new pipeline and the expansion of the terminal's capacities to maximise product value.

"This major project is a perfect example of our strategy, which is to constantly strengthen the industrial competitiveness of our major integrated platforms to position them among the industry's best," explained Bernard Pinatel, President, Total Refining & Chemicals. "It also illustrates our ambition in petrochemicals, where we aim to capitalise on the market's growth by processing low-cost feedstock. Antwerp's steam crackers will now be able to process up to 60% advantaged feedstock derived from gas, which are cheaper than naphtha, derived from oil."

Read the article online at: https://www.hydrocarbonengineering.com/refining/01122017/total-completes-upgrade-project/

Shell has completed the sale of its interest in the Deer Park Refining Ltd partnership, a JV between Shell Oil Co. and P.M.I. Norteamerica, S.A. De C.V. (a subsidiary of Pemex).