Carbon capture technology may be essential for the world to stay within the 2°C warming target outlined by the Paris Agreement. Although the deployment of this technology has begun to pick up in recent years, it is still a long way from the levels of scale-up needed to have a meaningful impact on climate change. Current technology for stripping CO2 from industrial gas streams or directly from the atmosphere remains costly and energy-intensive, and existing carbon capture facilities have struggled with downtime, keeping to CO2 capture targets, and managing costs. 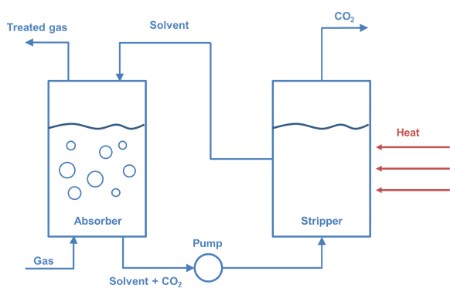 In this climate, there are significant research efforts aiming to boost the effectiveness of CO2 capturing technology and facilitate deployment of what could be a vital technology in the fight against climate change. “Carbon Capture, Utilization, and Storage (CCUS) 2021-2040” is a new report from IDTechEx, analysing the technical and commercial factors that could be key to the long-term success of carbon capture technology.

Almost all large-scale carbon capture facilities currently in operation use solvent-based capture methods, where the CO2-containing gas stream is exposed to a liquid medium that absorbs the CO2 by either a physical or chemical mechanism. The absorption liquid is then regenerated using high temperatures or reduced pressures to break the absorbent-CO2 bond, yielding a pure stream of CO2 that can be further processed. Although solvents can capture high levels of CO2, regeneration can be extremely energy-intensive, particularly for chemical sorbents, making the CO2 capture process uneconomical and reducing the sustainability of the process.

Most chemical absorption solvents are based on amines, with amines having been used for CO2 removal in gas treatment industrially since the 1950s. Primary alkanolamines such as MEA and DGA are the most widely used solvents for carbon capture, offering high chemical reactivity, favourable kinetics, and acceptable stability. However, there are also several drawbacks, including high energy consumption during solvent regeneration, corrosiveness, meaning that inhibitors and resistant materials are required, difficulties in scaling up to the level of thousands of tonnes of CO2 capture per day, and degradation in the presence of O2, SOx, and other impurities such as particles, HCl, HF, and Hg.

Research is focusing on overcoming these issues, with companies developing proprietary amine-based solvents for next-generation carbon capture projects, such as the KS-1 solvent developed by Mitsubishi, used in the Petra Nova facility in Texas, and Shell Global’s CanSolv Solvent, which is used in the Boundary Dam CCS project in Canada. Options include sterically-hindered amines that form weaker bonds with CO2 during the reaction, facilitating solvent regeneration, non-amine solvents that can offer novel chemical trapping mechanisms, and blends of amines and/or non-amines that can optimise CO2 capture for a given situation.

Unlike chemical absorption solvents, physical absorption solvents utilise a range of different compounds, with each solvent being suited to a specific use case. For example, the Rectisol process, licensed by Lurgi AG, an affiliated company of Air Liquide, uses chilled methanol as a solvent and can be applied for low and moderate CO2 concentrated gas streams. Due to the high vapour pressure of the solvent, the absorption stage must be carried out at very low temperatures to reduce solvent losses.

Although liquid amine scrubbing technology (i.e. chemical solvent-based capture) will likely dominate carbon capture for the next few years, there is much interest in alternative methods for CO2 capture, although it remains predominantly at the academic research level. Promising options include solid sorbent-based CO2 capture and membrane-based CO2 separation, although there is a range of other emerging techniques, such as cryogenic separation, electrochemical membranes, and additive manufacturing of novel system components and materials.

However, there are also several disadvantages. Manufacturing costs are likely to be much higher than for simple amines. There are also significant engineering challenges to overcome – many solid-based sorbents have only been tested at the lab scale under ideal conditions, meaning that much R&D is still needed before solid sorbents can become commonplace in commercial-scale carbon capture projects.

Svante is one of the few companies developing commercial-scale solid sorbent-based capture technology. The company’s technology captures CO2 from flue gas, concentrates it, then releases it for storage or utilisation, with the process taking only 60 seconds. The company uses nanoscale solid adsorbents with extremely large surface areas to maximise CO2 absorption, which it claims results in a greater absorption capacity than would be possible using solvents. Although the technology is still in its early stages, having been demonstrated in a 30 tpd pilot facility in Saskatchewan, Canada, many in the industry are optimistic about its potential. Svante has raised over US$75 million in funding and is engaging in partnerships with several companies across the carbon capture space, including Chevron Technology Ventures, Oxy Low Carbon Ventures, Climeworks, and Opus-12.

Membranes are also a potentially promising option for carbon capture. Because they are passive, relying on diffusion of CO2, don’t use chemicals or moving parts, and don’t require regeneration steps, membranes may result in significantly lower operating costs for CO2 capture compared with solvent or sorbent-based methods. The Polaris membrane, developed by Membrane Technology and Research Inc. in collaboration with the US Department of Energy, is the first commercial membrane developed specifically for CO2 capture applications.

However, there are many challenges associated with membrane separation for CO2 capture and few companies are actively using it in large-scale facilities or pilots. These challenges include trade-offs between gas permeance and selectivity, and stability issues in the presence of acid gases.

Membranes are also prone to fouling, reducing efficacy with time. The low partial pressures of CO2 in most waste gas streams also present a challenge. Before membranes can be commercially successful in CO2 capture, innovation in process design and membrane materials is required.

Nevertheless, if a successful membrane technology could be developed, it would drastically reduce carbon capture costs and could significantly propel carbon capture deployment across the world.

Beyond solvents, solid sorbents, and passive membranes, companies and researchers around the world are working to develop novel methods of capturing CO2 that can overcome the limitations of the more established technologies. SES Innovation is developing what it calls ‘Cryogenic Carbon Capture’, where gas streams are cooled to temperatures below -140°C, causing the CO2 to desublimate, forming a solid, which is then separated, gasified, and pressurised for utilisation or storage. SES Innovation claims this method can achieve up to 99% CO2 capture at a much lower cost than the conventional method. FuellCellEnergy is attempting to develop fuel cell technology specifically for carbon capture, using electrochemical membranes to separate CO2 from industrial waste gas streams. Researchers at the Oak Ridge National Laboratory are even investigating the use of additive manufacturing in carbon capture, developing creative heat exchangers and mass-exchanging contactors for efficient carbon capture.

Overall, innovation in carbon capture technology may be critical in ensuring the commercial viability of the technology, helping it overcome several of the barriers to widespread deployment. Although amine-based solvent capture methods are likely to remain the dominant choice over the next few years, a growing number of companies is innovating in the space of capture technology, developing a range of creative solutions for tackling the issue of CO2 emissions. The new report from IDTechEx, provides a comprehensive evaluation of technology development within the field of carbon capture, identifying the key drivers and restraints to success in the industry.

Read the article online at: https://www.hydrocarbonengineering.com/the-environment/27042021/idtechex-explores-innovation-carbon-capture-technology/

Baker Hughes and Woodside have entered into an MoU to explore potential business arrangements and initiatives that may have the potential to support Woodside’s climate strategy.