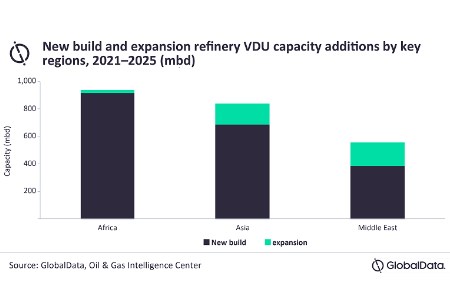 The company’s report, ‘Global Refinery Vacuum Distillation Units (VDU) Outlook to 2025 – Capacity and Capital Expenditure Outlook with Details of All Operating and Planned Vacuum Distillation Units’, reveals that Africa is likely to witness total VDU capacity additions of 936 000 bpd by 2025. Of this, 917 000 bpd of capacity would be from new build refineries and the remaining capacity from the expansion of existing refineries.

The Middle East ranks third globally, contributing an estimated 20% of global VDU capacity additions during the outlook period. Iraq accounts for the majority of the capacity additions in the region, with 300 000 bpd of capacity expected to be added by 2025 from five new build and one expansion project.

Read the article online at: https://www.hydrocarbonengineering.com/refining/07072021/globaldata-africa-leads-global-refinery-vdu-capacity-additions-by-2025/