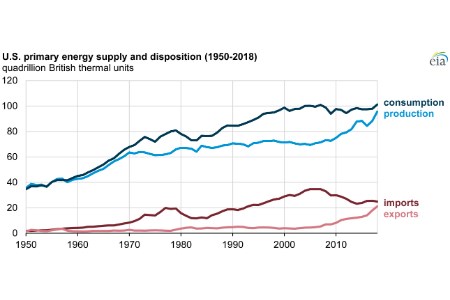 Exports of crude oil and petroleum products made up 68% of all US energy exports in 2018, accounting for most of the increase in total US energy exports from 2017. Petroleum product exports reached a record-high 10.2 quadrillion Btu, or 5.6 million bpd. Crude oil exports nearly doubled and reached a record-high 4.2 quadrillion Btu (2 million bpd), surpassing both coal and natural gas on an energy equivalent basis to become the second-highest US energy export. Exports of natural gas and biomass energy (e.g. ethanol) also reached new records in 2018, and coal exports reached its highest level since 2013.

In 2018, US energy imports decreased 2% compared with 2017, which, along with record-high energy exports, brought combined net US energy imports to their lowest levels since 1964. In 2018, the United States was a net exporter of coal, coal coke, petroleum products, natural gas, and biomass energy. The United States remained a net importer of crude oil, which has been true for every year since 1944. However, in 2018, net imports of crude oil reached its lowest level since 1991.

Read the article online at: https://www.hydrocarbonengineering.com/clean-fuels/08052019/us-energy-consumption-production-and-exports-reached-record-highs-in-2018/