Polskie LNG has declared war on mosquitoes. The weapon used is purely ecological – these are bats which will be brought to Swinoujscie in bigger numbers. Polskie LNG has bought several dozen bat houses for those helpful mammals. In consultation with leading chiropterologists (i.e. scientists studying bats) the bat houses were hung along the routes in the surrounding areas in the right-bank part of the city identified as conducive to the proliferation of insects. This is the first stage of the ‘ComBATing mosquitoes’ campaign launched by Polskie LNG this year. 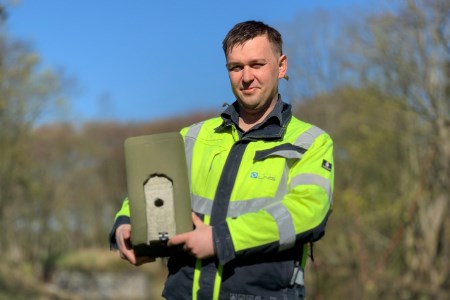 “Bat houses mounted in the area are an example of our pro-environmental action” said Michal Szklarski, environmental specialist at Polskie LNG Company. “It will bring tangible benefits to residents without harming the environment and at the same time educating the public and ultimately changing common perceptions of bats.”

These flying mammals are a natural enemy of insect pests. ‘Cooperation’ with bats will significantly contribute to the reduction of toxic chemical insecticides used so far and which were found to be harmful to bees and butterflies. It is worth noting that one bat can consume 10 000 insects at one night, and half of its diet may consist of mosquitoes.

“A bat is a great hunter who loves to chase mosquitoes. That is why we decided to invite more of those mammals to feeding grounds near the LNG Terminal. The new bat houses will sooner or later attract more bats and perhaps they will inhabit them with their bat families” added Michal Szklarski.

Meanwhile, Polskie LNG environmental specialists would like to encourage the residents to buy similar bat houses. The battle on mosquitoes will be more effective with more ‘bird huts’ for swallows and swifts.

"The more natural predators of those 'bloodsucker' mosquitoes, the better” emphasises Piotr Piwowarczyk, Director of the Museum of Coastal Defense at Fort Gerhard where several bat houses and bird huts were installed. “It is easy to prove that every single bat can make a great difference in terms of the comfort for the staff of the fort and tourists visiting our facility.”

The next phase of ‘ComBATing mosquitoes’ project will be implemented in a few weeks' time. The company plans to organise interactive classes for children and teenagers with the participation of scientists and bat lovers.

Read the article online at: https://www.hydrocarbonengineering.com/the-environment/01052019/a-winged-solution-to-pests-at-polish-lng-terminal/