The Abu Dhabi National Oil Co. (ADNOC) and OCP Group of Morocco (OCP) have agreed to explore the phased creation of a new global fertilizers joint venture (JV), in a move that will accelerate the execution of both companies’ international strategies. 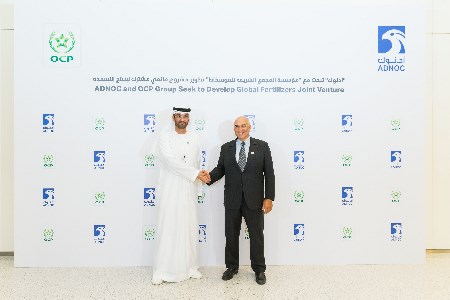 The proposed partnership will comprise two fertilizer production hubs, one in the UAE and one in Morocco (utilising both existing and new assets), giving the proposed JV global market reach.

This proposed project extends a partnership that has already been established through the existing long-term sulfur offtake agreement that was announced by the two firms in December 2017. The two companies will work on developing capabilities that will support this venture, as they expand their partnership, leveraging their respective strengths and building their human capital.

The agreement aligns with ADNOC’s announced plans to increase production by at least 50% from its current levels of 7 million tpy, as it looks to increase gas production by tapping into vast gas caps and scaling up sour gas production. OCP has engaged in a large-scale development programme that will enable it to capture its fair share of growing demand for fertilizers. The first phase of this programme was completed this year and has brought the Group’s existing fertilizer capacity to 12 million t, and rock export capacity to over 18 million t.

The agreement comes as ADNOC unveils its ambition and plans to become a global downstream leader, enabling it to further stretch the value of every barrel it produces to the benefit of ADNOC, its partners and the UAE. It aligns with ADNOC’s 2030 strategy of a more profitable upstream, more valuable downstream, more sustainable and economic gas supply, and more proactive, adaptive marketing and trading. This project further supports ADNOC’s downstream growth plans to create the world’s largest integrated refining and petrochemicals complex in Ruwais.

Read the article online at: https://www.hydrocarbonengineering.com/special-reports/16052018/adnoc-and-ocp-form-fertilizer-jv/