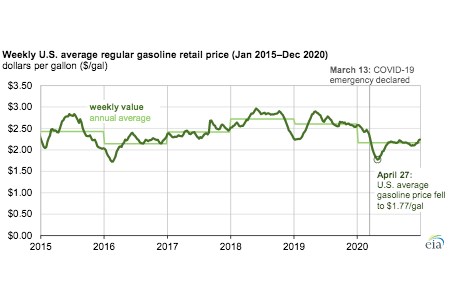 Gasoline prices at the beginning of the year were more than US$2.50/gal; however, responses to the COVID-19 pandemic resulted in widespread reductions in passenger travel and gasoline demand, contributing to lower gasoline prices across the US.

US gasoline prices averaged US$2.38/gal in mid-March, just before a national emergency was declared. Gasoline prices fell for several consecutive weeks, ultimately reaching US$1.77/gal on 27 April, the lowest average price since early 2016, according to the EIA's Gasoline and Diesel Fuel Update. Vehicle travel in April fell to its lowest monthly level on record, according to a Bureau of Transportation Statistics data series that dates back to 2000.

Vehicle travel and gasoline demand (measured as product supplied) began to increase in May, relative to April levels. From May through the end of the summer, US gasoline inventories remained high because of sustained lower demand, even as refiners reduced gasoline production because of lower margins.

Read the article online at: https://www.hydrocarbonengineering.com/special-reports/06012021/eia-us-average-gasoline-prices-and-vehicle-travel-fell-to-multiyear-lows-in-2020/

Sichuan Energy Investment (SCEI) and hte have signed an MoU to establish a satellite laboratory in Heidelberg, Germany, to accelerate SCEI’s R&D activities.