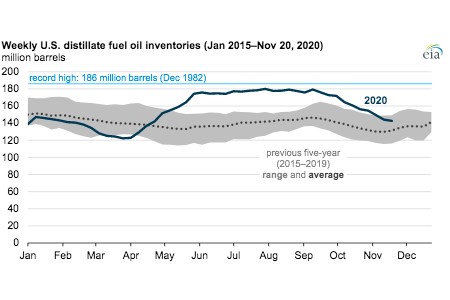 US distillate inventories reached 180 million bbl in late July, only 3% less than in December 1982, the largest US inventory in EIA’s data, which go back to 1982.

US demand for distillate has been generally increasing since it reached an annual low in May (based on the rolling four-week average). The increasing demand for distillate fuel has contributed to the recent inventory decline. As of the week ending 20 November, weekly EIA data indicate that distillate demand reached 4.2 million bpd, similar to the previous five-year average for this time of year.

Read the article online at: https://www.hydrocarbonengineering.com/refining/01122020/us-distillate-inventories-fall-back-within-2015-2019-range/