In partnership with MAN Energy Solutions, the Alfa Laval Fuel Conditioning Module (FCM) LPG has undergone successful tests with the first two-stroke, high-pressure marine engine to use LPG as fuel – and has been evaluated for use with ammonia. 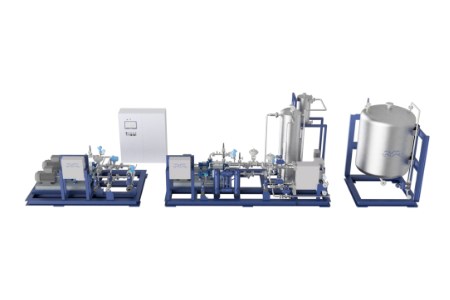 The competitiveness of LPG as a fuel is increasing. Not only does LPG virtually eliminate sulfur emissions, it has a lower cost than many other fuels and is readily available worldwide. For these reasons and others, MAN Energy Solutions has developed the new LPG-fuelled MAN B&W ME-LGIP marine engine. Alfa Laval, having successfully provided fuel boosters for the first methanol-fuelled chemical tankers, was selected as the ideal partner to develop, supply and test the engine’s low-flashpoint fuel supply system (LFSS).

“Given our previous work with MAN Energy Solutions in the area of low-flashpoint fuels, we were well acquainted with the specific challenges involved,” says Roberto Comelli, Global Sales Manager Fuel Conditioning Systems at Alfa Laval. “Naturally, we were eager to continue our partnership and to build on the positive experience with methanol.”

The resulting booster system, the Alfa Laval Fuel Conditioning Module (FCM) LPG, is the first proven solution to provide LPG to a high-pressure combustion engine for marine applications. Compared to methanol, LPG must be pumped at a higher supply pressure in order to avoid phase changes and to deal with a wide composition spectrum. Alfa Laval designed the system not only for robustness, but also to function optimally under the full range of process conditions.

To deliver LPG at the 53 barg pressure the engine requires, the FCM LPG incorporates new pumping technology and effective high-pressure heat exchange, which are built into low-pressure and high-pressure skids. The latter of these has a filtration stage comprising two independent chambers, which allows it to be serviced with the system in continuous operation – a setup derived directly from the booster experience with methanol. Equally critical is the new automation and control system, which matches the LPG flow to fluctuating engine load without unnecessary heat input from the pumping and flashing of light fractions in the LPG.

“On board, the FCM LPG will be run from the engine control room by the same people who usually deal with traditional fuels and equipment,” says Comelli. “The FCM LPG automation safeguards engine performance offers the same ease of use found in other Alfa Laval products. That built-intelligence is key to reliability, efficiency and safety.”

An additional key feature of the FCM LPG is its LPG recovery function, which provides full liquid LPG recovery and partial LPG gas recovery when the engine or fuel valve train is purged. Recovering LPG rather than fully venting it to atmosphere is more than just economical.

“Legally there is nothing that now prohibits occasional venting of LPG into the atmosphere,” says Comelli. “However, the relevant regulations and international guidelines make clear that venting of hydrocarbons should be avoided whenever possible. LPG is also heavier than air and does not disperse like LNG does, so it’s important to minimise the effects of unexpected venting event.”

In tests performed in Denmark at the MAN Energy Solutions Research Centre Copenhagen, the FCM LPG prototype has been shown to meet – and even exceed – the fuel supply requirements of the MAN B&W ME-LGIP engine. Tests with the fuel valve train and a simulated engine load began in 2Q18, followed by online tests using the facility’s 4T50ME-X prototype engine in 1Q19.

“Both sets of test results verify the booster’s ramping functions and its ability to match the output pressure to our engine’s changing load,” says René Sejer Laursen, Promotion Manager at MAN Energy Solutions. “In fact, almost no influence from the engine load can be seen, which demonstrates the effectiveness of Alfa Laval’s automation and control.”

“This was a testing phase not only for the FCM LPG, but also for the ME-LGIP engine design,” says Comelli. “For Alfa Laval, it was a privilege to test the very first LPG booster system on the first two-stroke marine engine to use LPG as fuel. As we move from the prototype FCM LPG towards a final marine design, we are proud to continue our longstanding cooperation with MAN Energy Solutions in meeting the fuel needs of a changing marine industry.”

Ahead, the companies even see possibilities for the FCM LPG as a booster for ammonia. “We at MAN Energy Solutions see a strong potential in the use of ammonia as fuel,” says Sejer Laursen. “The FCM LPG has already been evaluated for the purpose, and we’ve seen that it can be made compatible with ammonia for only a small investment.”

Read the article online at: https://www.hydrocarbonengineering.com/product-news/17042019/man-energy-and-alfa-laval-successfully-test-lpg-fuelled-technology/