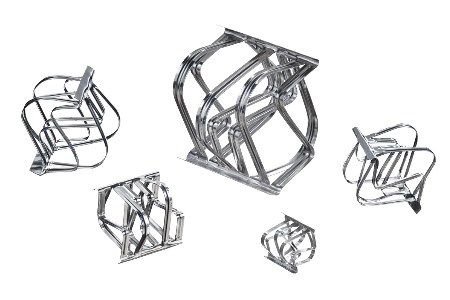 To provide optimal column performance, the design of random packings should provide a number of features. Firstly, they should generate a large surface area that brings the liquid and the vapour phases into contact. The packings should spread evenly within the column packing section, creating a uniform surface area distribution to provide an orientation-independent column performance. In addition, the structure of the packings should not create a tortuous flow path for the vapour in order to maintain a low pressure drop. Finally, the shape should discourage nesting between packing elements and promote lower liquid flow resistance.

Combining all of these considerations and providing an optimised structure for random packings can be challenging, but the results offer improved separation efficiency inside the column.

Highly skilled suppliers/providers of random packing can boost the efficiency and performance of columns and the entire plant by providing cutting-edge designs for random packings. In order to ensure the quality of the products, Sulzer's R&D engineers conduct in-house testing before their launch on the market. Some of these tests were verified by an independent institute in the US.

The performance of this packing is delivered by a relatively large and accessible ring surface on which the separation process can take place, the special shape of the rings, which allows for a higher packing density and thus a larger available surface, and the open design of the rings, which reduces the pressure drop compared to conventional rings by up to 50%.

NeXRing packings distribute themselves evenly within the column packing section, while the structure of the rings provides for uniform liquid and gas flow through the column. The shape of the packing appears fragile, but the end flanges and the reinforced ribs give the packing a high mechanical strength.

These packings are used in many industrial sectors, such as for the removal of CO2 and H2S from natural gas or biogas. For this purpose, the gas is brought into contact with amine-based solvents, such as monoethanolamine (MEA), diethanolamine (DEA), methyldiethanolamine (MDEA) or MDEA/piperazine solutions (activated MDEA).

A common feature of these solvents is their strong tendency to foam, which affects the flow of the gas through the separation column. The high open surface area enables separation with less pressure drop and thereby reduces the hydraulic effect of foaming. As a result, the overall column efficiency is increased.

A significant increase in global coal gasification capacity is expected in the near future. This is especially true for regions like the Far East and Asia. The actual coal gasification step is usually followed by a methane separation process. The raw gas produced from coal consists mainly of CO, H2 and CH4. In the methane separation column, the three constituents are separated into two streams: CO and H2, and liquid methane, which is easily transported in condensed form and sold LNG.

A plant in China operated a methane separation column with four different sections, designed for operation with a feed of 25% CO, 58% H2 and 17% CH4. However, the change in the type of coal used for the gasification significantly altered the composition of the feed to the methane separation column. In fact, the new raw gas composition was actually 25% CO, 51% H2 and 24% CH4.

In view of the increased load in the lower column sections, the capacity of the existing column was insufficient to process gas with this composition. Sulzer retrofitted the column and replaced the existing random packings in the two lower sections with NeXRing packings. The customer was very satisfied with the result as the replacement increased the capacity of the entire system by 20%. Furthermore, Sulzer spotted that the replacement of the existing liquid distributor in the lowest section could yield an even higher increase in capacity.

Sour water and sour gas are produced in oil refineries as waste products from atmospheric and vacuum columns. H2S, NH3 and HCN are typical components of sour water that must be removed before the water can be used elsewhere in the plant. This happens in so-called ‘stripping columns’. By supplying heat in the form of steam, H2S and NH3 are removed from the sour water and withdrawn as gases from the top of the column.

An integrated power plant of a refinery in Asia was unable to meet government wastewater treatment requirements for the existing plant. Sour water and sour gas from the upstream process were fed to the stripping column. Particles and dust from the sour water accumulated in the packed bed and led, after a short time, to an increase in the pressure drop in the column.

The company upgraded the random packings to the NeXRing model in the two lower sections of the three-part column, where the fouling occurred. Even after half a year of operation no increase in pressure drop could be detected. The open design of the new packings the small particles to flow through unhindered without getting stuck. In addition, in all three column sections, the overall pressure drop in the column is lower than in the previous arrangement. The customer regularly checks the pressure drop for quality assurance in order to ensure compliance with the state's requirements.

Governments globally have adopted stringent regulations to reduce global air pollution from SO2 emissions. An Asian customer, operator of a refinery, was unable to meet the new government regulations with its existing equipment. To reduce the SO2 content in the flue gas, a new column had to be built. Sulzer performed the calculations and developed a concept that allowed the customer to meet government regulations using Sulzer’s products and a new process arrangement.

SO2 is removed in several stages using water and alkaline solutions. The goal was a reduction of the SO2 content in the exhaust gas below 50 ppm. By replacing the original random packings, it was possible to increase efficiency. Since a certain amount of dust is to be expected during the process, the resistance of NeXRing to contamination was also an advantage.

The calculations convinced the customer, which opted for a column equipped exclusively with NeXRing packings. The column is now successfully in operation and the SO2 content could be reduced to 35 ppm. The total pressure drop is 40% less than required, resulting in significant energy savings over the service life of the column.

Design the column yourself

Read the article online at: https://www.hydrocarbonengineering.com/product-news/13072018/sulzer-welcomes-new-random-packing-design/