As reported by the US Energy Information Administration (EIA), fuel ethanol production capacity in the US reached 15.5 billion gal./year, or 1.01 million bpd, at the beginning of 2017. Total capacity of operable ethanol plants increased by about 4%—or by more than 600 million gal./year—between January 2016 and January 2017. 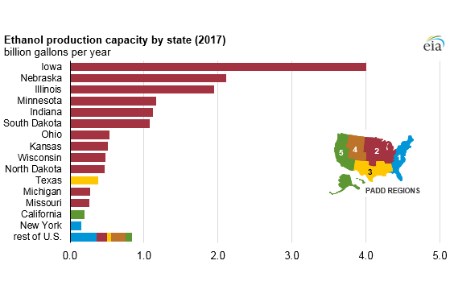 Nameplate capacity is not necessarily a physical production limit for many ethanol plants. By applying more efficient operating techniques many ethanol plants can operate at levels that regularly exceed their nameplate production capacity. This level of operation, called maximum sustainable capacity, is inherently subjective.

Read the article online at: https://www.hydrocarbonengineering.com/petrochemicals/29062017/eia-ethanol-production-increase-continues/

Air Products has signed an agreement with SCD JV S.c.a.r.l, a joint venture of Saipem, Chiyoda and Daewoo, for the Nigeria LNG (NLNG) Train 7 project.