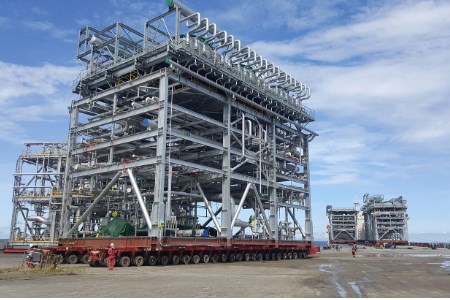 Following its completion, the facility is expected to produce 1 million tpy of methanol and 20 000 tpy of dimethyl ether, supplying next-generation clean energy and significantly contributing to the local economy.

Over the course of one year, the major cargo was received in a total of 22 shipments. Mammoet’s scope included port handling activities, inland transport coordination and the customs clearance process inclusive of the 120 modularised vessel cargoes. This was a large-scale and complex logistics project, requiring thorough preparation and detailed planning to ensure safe and timely delivery.

Using up to 96 axle-lines of SPMT, the cargo was temporarily staged and then transported to site for final installation. The heaviest vessel weighed in at 610 t and was tandem lifted by the company’s CC8800-1 and CC2800-1, while the heaviest reformer weighed in at 1 240 t and was set onto foundations by SPMTs. In addition to the major items, 561 containers and 200 000 t of general cargo from various ports in Trinidad and Tobago were successfully delivered.

Read the article online at: https://www.hydrocarbonengineering.com/petrochemicals/22032019/mammoet-delivers-components-for-major-trinidad-plant/