Kuwait and Nigeria will contribute significantly to capacity growth in the Middle East and Africa’s LNG industry between 2018 and 2022, according to data and analytics company, GlobalData. 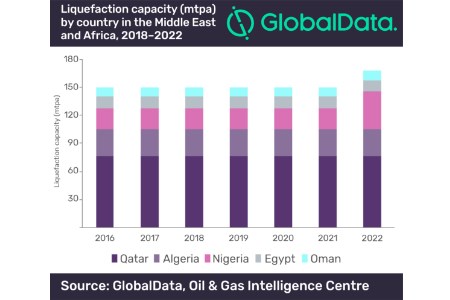 Nigeria will have the highest liquefaction capacity additions of 18 million tpy, increasing from 22 million tpy in 2017 to 40 million tpy by 2022 at an AAGR of 12%. The country is expected to spend US$25.26 billion - more than 30% of the region’s total capital expenditure (CAPEX) - on new build liquefaction terminals during the outlook period.

Soorya Tejomoortula, Oil & Gas Analyst at GlobalData, explains: “Nigeria is expanding its liquefaction capacity to capture increasing global demand of natural gas. The country aims to become one of the major suppliers of LNG globally.”

Tejomoortula adds: “Kuwait is increasing its LNG regasification capacity to meet its growing domestic power demand. The country is grappling with chronic electricity shortages, which is threatening its economic development. The new LNG terminal will also generate business opportunities to the local companies and helps in promoting industrial growth in the country.”

Turkey will be the next highest country in Middle East and Africa with planned regasification capacity additions of 392.7 billion ft3 by 2022. The country is expected to spend roughly US$548.5 million on the development of new regasification terminals.

Al-Zour (Kuwait) is the largest planned regasification terminal in the region, with a capacity of 1.071 trillion ft3. The terminal is expected to come online by 2021 with an estimated CAPEX of US$3.3 billion.

Read the article online at: https://www.hydrocarbonengineering.com/gas-processing/29082018/kuwait-nigeria-lead-middle-east-africa-lng-growth/

The company will supply up to 2.5 petajoules of natural gas under the initial two and a half year agreement.