The successful conversion of a slow-speed marine diesel engine to operate on Ethane as a fuel has taken place on board the American Bureau of Ships (ABS)-classed Navigator Aurora (pictured). 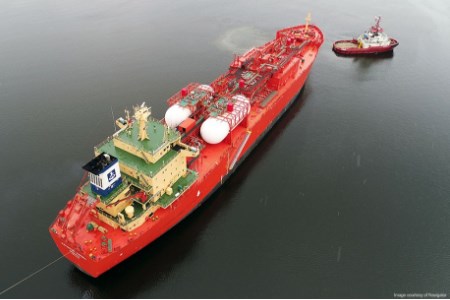 The 15 day-long conversion followed engine performance and emissions testing at Kawasaki in Japan, to prove that burning ethane in the Navigator ME-GI engines would be possible. The trials demonstrated that suitable power and emissions performance, meeting classification and statutory requirements, was available at a fuel gas injection pressure of just over 300 bar.

Paul Flaherty, Director of Fleet and Technical operations, Navigator Gas, said: “This retrofit modification will comply with all current global emissions regulations and position us as early adopters of the global sulfur cap regulation due to come into force on 1 January 2020.”

Read the article online at: https://www.hydrocarbonengineering.com/gas-processing/24082018/abs-classed-marine-diesel-engine-converted-operate-ethane/