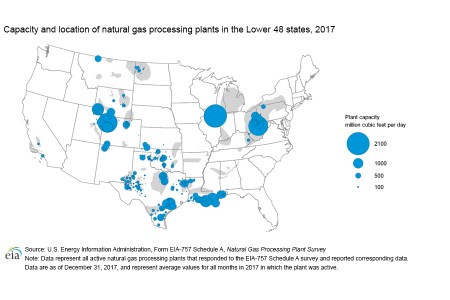 States showing the most volumetric growth in processing capacity over this period are Texas and surrounding states, states in the Appalachian Basin, and North Dakota and Montana near the US portion of the Bakken formation.

The EIA estimates that processing plant capacity grew most rapidly in Texas between 2014 and 2017, increasing by about 3.7 billion ft3/d, or by approximately 15%. During this period, however, natural gas production in Texas declined—likely related to the commodity price of natural gas, which fell substantially between 2014 and 2017, from US$4.37 to US$2.99 per million British thermal unit on an annualised basis.

Oklahoma had a similar increase in processing capacity during this period, expanding by 1.3 billion ft3/d, or 19%, while production grew by only 8% during the period. Processing plant capacity may have grown regardless of production because of the significant lead time and financial investment required to build midstream infrastructure. In addition, the US Gulf Coast features a large network of natural gas pipelines, giving producers in the region access to multiple processing facilities and options to process gas in nearby states.

In the Appalachian Basin in the Northeast, West Virginia showed a large increase in processing capacity, up about 1.4 billion ft3/d, or 35%, relative to 2014. Similarly, processing capacity in Pennsylvania increased by about 0.4 billion ft3/d, or 49%. Processing capacity in Ohio remained essentially flat, despite a significant increases in natural gas production during this period. Many processing plants in the region are located close to shared borders between Pennsylvania, Ohio, and West Virginia, which may explain the minimal change in Ohio’s capacity, because natural gas produced in one state can be processed in another.

In the Bakken formation near the northern border of the US, North Dakota processing capacity expanded by 0. billion ft3/d, and Montana processing capacity expanded by 0.5 billion ft3/d. In recent years, producers in the Bakken formation have flared large volumes of natural gas, in part because the associated natural gas produced as part of crude oil production often lacked both pipeline infrastructure to reach end-use consumers and the processing infrastructure to remove heavier hydrocarbons from the natural gas. In the last few years, natural gas production in the region has increased faster than oil production, and this production increase is partly attributable to infrastructure buildout in the region, which has also helped reduce flaring.

In the Lower 48 states, natural gas processing plant throughput both increased by about 5% between 2014 and 2017 on a net basis according to EIA estimates, and nationally, dry production increased by slightly less than 5% during that period.

Utilisation rates of natural gas processing plants, defined as the ratio of throughput to capacity, remained stable between 2014 and 2017 on a net basis, according to EIA estimates, although results for individual states differed substantially. States with large production growth during the period tended to have higher utilisation rates in 2017.

The utilisation rate in Texas, which saw a substantial increase in capacity during the report period and a decrease in natural gas production, declined from 75% to 69%. Louisiana, Oklahoma, and New Mexico experienced similar decreases in utilisation.

The estimates for natural gas processing plant throughput for 2017 show similar trends in two EIA surveys—the Form EIA-757 and the Form EIA-64A survey. Notable differences between the state-level results are the result of two main factors:

Read the article online at: https://www.hydrocarbonengineering.com/gas-processing/15022019/eia-natural-gas-processing-capacity-increased-in-lower-48-states-between-2014-and-2017/

The new facility is located in Texas, US, and will produce materials used in packaging, agricultural film, construction materials, clothing, and automotive coolants.