Arca Flow Controls in Houston/ Texas, the US subsidiary of Arca Regler GmbH/ Germany, received last year an order in the US for the delivery of several large anti-surge control valves. The delivery of the valves now took place beginning of this year. The valves are designed for several compressor lines in Mexico, which are supposed to go on line in winter 2017 or beginning of 2018. 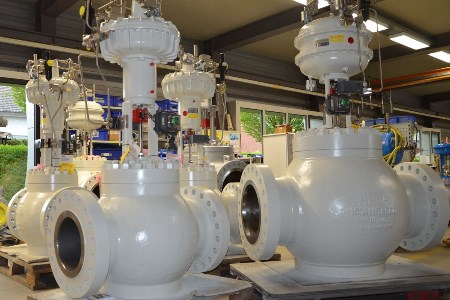 The anti-surge globe-type control valves come from the proven Ecotrol® modular parts system. The valves have to prevent the compressors from pumping in stressful situations in the plant. They also prevent an airflow disruption at the compressor blades in order to preclude damages at the compressor.

The pipelines will deliver natural gas to CFE (Comisión Federal de Electricidad) power stations as well as industry plants. The compressor stations output serves a pipeline of about 1500 km length that transports the natural gas from the North into the country’s inland.

For the supplier’s choice of the anti-surge valves on the one hand deep application knowledge, the competitiveness as well as reliability and the easy to maintain clamping seat design have been decisive. Arca Regler offers most advanced solutions for anti-surge control valves and can look back on a huge knowledge and wealth of experience. The continuous development of the Ecotrol ® modular parts system further allows to satisfy the growing demands of the compressor manufacturers market. A high flow rate, low noise level, fast reaction times as well as high control accuracy are only few advantages that this modular parts system distinguishes from others.

Read the article online at: https://www.hydrocarbonengineering.com/gas-processing/14072017/arca-regler-delivers-five-anti-surge-valves-to-mexico/