The first foundation for the Amur gas processing plant (GPP) has been laid in the Svobodnensky district of the Amur region, Russia, with a ceremonial event being held and attended by Vladimir Putin (President of the Russian Federation) and Alexey Miller (Chairman of the Gazprom Management Committee). 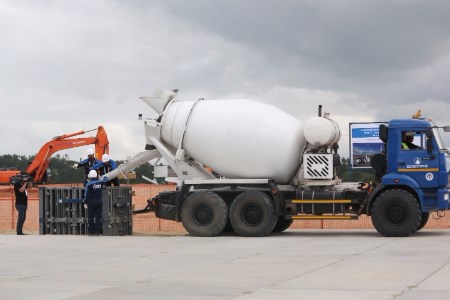 The Amur GPP has strategic importance for the Eastern Gas Program. The plant will be supplied via the Power of Siberia gas pipeline with multi-component gas from the Yakutia and Irkutsk gas production centres that are being set up by Gazprom.

The GPP will extract valuable substances, primarily ethane and helium, from gas for the purposes of the petrochemical and other industries. The processed gas will be then exported to China.

Site preparation works for a more than 850 ha. area have been completed, with a utility system in place. By laying the foundation for the plant, Gazprom launched the main phase of the construction project with the establishment of the key gas processing facilities.

The Amur GPP will have six production lines, each of which will be an independent gas processing facility with the annual capacity of 7 billion m3. Two process lines will come online at the first start-up complex, while the other four will be consecutively put in operation later. The GPP will thus reach its design capacity of 42 billion m3/y of gas, becoming the largest such plant in Russia and one of the biggest in the world. The plant will also include the world's largest helium production facility (up to 60 million m3/y).

“In less than two years, we have successfully completed the initial construction of the Amur GPP, the largest and most advanced gas processing plant in the country. Today, we launched the next crucial and essential stage. We laid the first foundation and will soon start installing the facilities that will be vital to the future plant,” said Alexey Miller.

Read the article online at: https://www.hydrocarbonengineering.com/gas-processing/04082017/first-amur-gpp-foundation-laid-by-gazprom/