TEN Ltd., a leading crude, product and LNG tanker operator, has announced the delivery of the Aframax crude tanker ‘Thomas Zafiras’ from Daewoo Mangalia Heavy Industries, which will immediately enter a long term contract to a Northern European charterer that could generate gross revenues in excess of US$100 million.

This is the second vessel in a series of nine purposely built Aframax tankers on long term time charters at accretive rates.

The company's pro-forma fleet, including one VLCC, one LNG carrier, eight Aframax tankers, a Suezmax DP2 shuttle tanker and two LR1 product tankers all under construction, consists of 65 double-hull vessels, constituting a mix of crude tankers, product tankers and LNG carriers, totalling 7.2 million dwt. Of these, 47 vessels trade in crude, 13 in products, three are shuttle tankers and two are LNG carriers. All of TEN's tanker newbuildings, except the one remaining VLCC Hercules and the LNG carrier Maria Energy, are fixed on long term project businesses. As of August 2016, about 60% of 2016 fleet available days, assuming nine deliveries, are on secured contracts with an average length of 2.5 years and minimum gross revenues of about US$1.5 billion.

Read the article online at: https://www.hydrocarbonengineering.com/tanks-terminals/18082016/ten-delivers-long-term-charter-crude-tanker-3940/

The refinery has completed a scheduled overhaul of hydrocracking, hydrogen production, base oil production and elemental sulfur production facilities.

According to the EIA’s petroleum weekly, US crude oil exports are reaching more destinations and the number continues to increase. 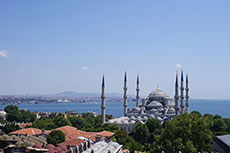