On 28 July 2016, the Petroleum Facilities Guard (PFG) under the leadership of Executive Director Ibrahim Jadhran and key members' of the Government of National Accord's (GNA) Presidential Council signed an agreement to reopen the ports of Ras Lanuf, Zuwetina, Es Sidra and Brega.

This move marks a resumption of national oil export activities as requested by the Presidential Council and reiterates the recognition of the GNA by the PFG and willingness to cooperate for the future of Libya. These negotiations come just a few days after a visit to Ras Lanuf by UN Special Envoy Martin Kobler who met personally with Jadhran to discuss the economic future of Libya and how the PFG can and should play a vital role.

The physical security of the regional infrastructure to include the ports was made possible through extensive counter terrorism operations conducted by the PFG from June 2015 to July 2016 and resulted in the liberation of the cities of Bin Jawad, Nawfaliyah, and Harawah from ISIS and virtual elimination of terrorist activities in the critical Oil Crescent Region of Libya.

PFG Executive Director Ibrahim Jadhran stated, "We again reiterate our unwavering support for the Government of National Accord and would do whatever is necessary to protect Libya's economic prosperity and bring peace and stability to the Libyan people."

The resuming of port operations in the region is expected to bring in an additional US$700 million in revenue to the struggling Libyan economy over the next several months.

The PFG is the singular paramilitary security force within Libya entrusted to secure the oil infrastructure of the country. The PFG operates in conjunction with the Libyan Government of National Accord and its Presidential Council. The organisation employs over 20 000 personnel covering a region of over 170 000 km2 and 212 separate oil, gas and port facilities.

Read the article online at: https://www.hydrocarbonengineering.com/tanks-terminals/01082016/libya-petroleum-facilities-guard-reopens-four-oil-exporting-countries-3819/ 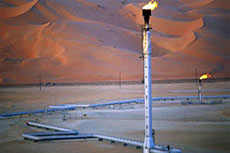 GlobalData have said that Libya’s oil and gas industry is to suffer long lasting effects due to the country’s instability.

There are still ongoing security issues in Libya, which are likely to slow down attempts at getting oil production back up to pre-conflict levels.