Sealing at high temperatures (typically 400°C and above) is challenging because standard materials, such as expanded graphite, cannot reliably perform for extended periods of time in such conditions. This results in bolted joint failure and a leak occurring. Up until now, compromises have had to be made with material selection, which has a detrimental effect on the leak performance of a bolted joint over time at elevated temperatures. 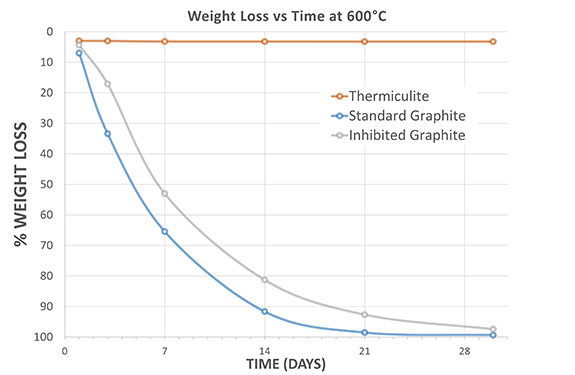 Graph showing the comparison between Thermiculite and both inhibited and standard graphite. Note that although the oxidation is marginally delayed for the inhibited graphite, it still degrades, whereas the Thermiculite is unaffected over time. 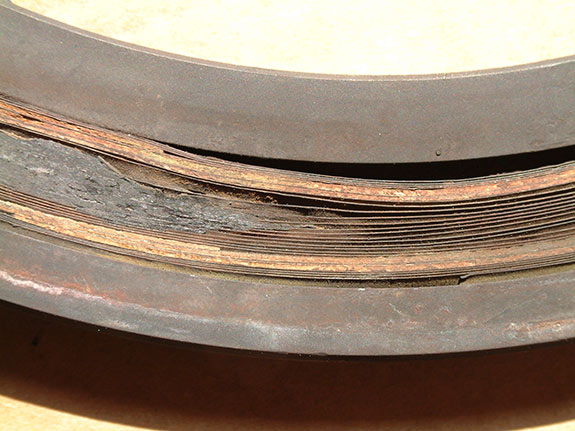 A HOT style spiral wound gasket with mica on the OD and ID. Note the loss of graphite from the spiral due to oxidation even with the mica 'barrier'. Leakage of the gasket resulted in a titanium dioxide plant being shutdown.

Traditionally, the options available to gasket users have been to use graphite or mica, or a combination of the two materials in an effort to offset their inherent weaknesses. Whilst graphite seals well at ambient temperatures, as it is an organic material, at moderate to high temperatures the carbon oxidises and over time the seal loses its integrity and performance diminishes. This can happen surprisingly quickly, even at moderate temperatures, and is accelerated as temperatures rise. Even when graphite is treated with oxygen inhibiting chemicals their effect is only temporary.

Graphite is carbon, and carbon oxidises and causes the seal to degrade. In the most extreme cases the graphite is fully oxidised, which results in a total loss of containment – this can be catastrophic. 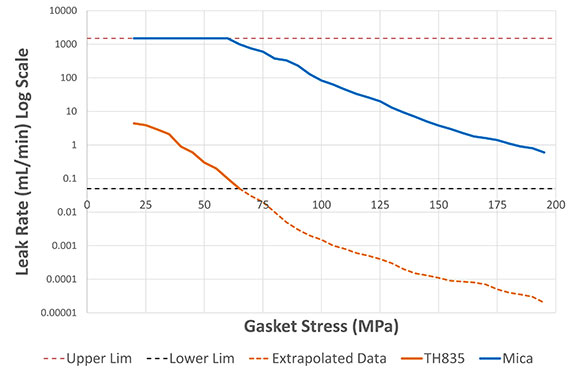 An alternative option that has been used to delay the onset of graphite oxidation is to protect the seal using a barrier. Mica exhibits excellent thermal resistance however as it is porous it does not perform well as a seal.

This means that, although in theory the mica provides thermal resistance and protects the graphite sealing element, in reality it does not provide an effective gas tight seal, and so the graphite is still attacked and ultimately these high operating temperature (HOT) style gaskets fail.

In some very high temperature applications, or where graphite is either chemically incompatible or promotes corrosion, companies have attempted to use solely mica, but these gaskets do not provide an adequate seal and so cannot be considered a viable option. Other technologies have been tried, such as hydrophobic talc based materials, but whilst these claim to offer good performance, serious failures in service have been recorded due to the material not offering reliable long term integrity.

Increasingly, process temperatures are rising and operators are looking to extend maintenance intervals. This requires gasket materials that can withstand these high temperatures, whilst also offering long term reliability. Safety is critical and so choosing a proven, reliable solution is paramount.

To address these issues, Flexitallic developed a new material that has the same sealing characteristics of graphite but the thermal resistance of mica. The material is called Thermiculite®, and was born out of industries’ requirement for a gasket material that can operate at higher temperatures for longer periods of time whilst maintaining seal integrity.

The innovative manufacturing techniques that have been developed mean that Thermiculite gaskets can be offered in many different forms – sheet, spiral wound and Kammprofile, as well as the new Change™ gasket. This means that the selection of one material technology across a site is perfectly achievable.

One of the most significant innovations in the sealing industry since the creation of the spiral wound gasket by Flexitallic more than 100 years ago, Change was introduced in direct response to customers’ long term heat exchanger problems. Undergoing multiple cycles containing extreme ranges of temperature and pressure, heat exchangers were prone to regular maintenance and downtime as a result of replacing gaskets unable to operate in these tough conditions.

The patented Change gasket is manufactured using proprietary equipment and features a metal spiral profile five times thicker than standard gaskets. By using a unique laser welding process that penetrates completely through the winding, no inner or outer rings are required. The gasket’s capabilities have been proven through a series of studies, including radial shear testing (RAST), shell extended thermal cycling, leakage and compression testing, which all yielded highly positive results. 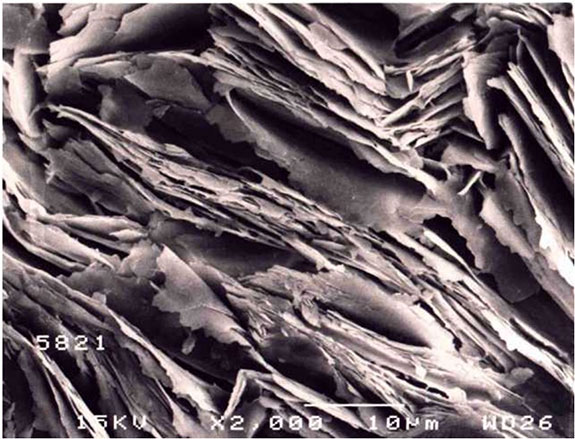 A radial shear test, originally developed by PVRC/ASME along with Ecole Polytechnique at the University of Montreal, was undertaken to simulate the differential expansion and contraction of heat exchanger flanges. The test is conducted over 100 thermal cycles with nitrogen pressurising to 40 bar and leak test every 20 cycles.

The flange is a tongue and grove type, typical of a heat exchanger. The gasket size is 453 x 427 mm (nominal 3.2 mm thick). The lower flange is cycled to 300°C and the upper flange is water cooled, thus maximising differential growth in the system and generating approximately 0.8 mm radial shear on the gasket. The key measurement however, is the bolt relaxation as this is considered a measure of the resistance of the gasket to radial shear.

The gasket survived the test with negligible visible damage, and showed only a 15% relaxation in bolt stress after 100 cycles. By comparison the next best performing is the spiral wound gasket with a bolt relaxation of around 25%. The Change gasket exhibited no major leakage in the test, which is in stark contrast to the jacketed type gasket.

The best evidence, however, comes from successful applications where Change consistently performs in tough environments. For example, a refinery application has seen Change operate effectively through cycles ranging from ambient to 379°C, experiencing no issues to date and outperforming all previously used gaskets. Prior to the installation of the 63 in. diameter, 510 PSI gasket, the refinery would require multiple gasket replacements between major outages following 28 thermal cycles.

Change can be supplied with PTFE, graphite filler and a variety of metals, but excels in high temperature applications when coupled with Thermiculite.

Because vermiculite is an inorganic silicate, Thermiculite material possesses outstanding resistance to very high temperatures and also aggressive chemicals. It has also passed the stringent API 6FB fire test making it ideal for hydrocarbon applications. Due to the materials electrical insulating properties it is now used in applications where crevice corrosion is a problem such as offshore oil and gas and seawater applications.

Thermiculite offers a single solution, replacing the need for a range of materials, none of which provide a lasting solution at temperature. Real savings can be made in terms of reduced maintenance costs, reduced downtime, rationalisation of inventory, emissions compliance and of course improved safety through better joint integrity.

Thermiculite has been used successfully in thousands of applications across the industry since 1997.

A state-owned oil company introduced Flexitallic product innovations after facing leak issues in a high temperature and corrosive environment within its refineries, which can have an impact on productivity and efficiencies.

Head flanges within the refineries’ heater systems have a 7 bar pressure and operate at temperatures between 520 and 540°C. Previously, the company had been utilising the Spiral Wound Gasket CG 304 with a graphite filler, which was recommended by the equipment manufacturer.

However, this gasket material combination, under the service conditions, lead to leaks, which was exacerbating corrosion within the heater system. To overcome the issue, Flexitallic recommended Spiral Wound Gaskets CGI 316 ring and winding containing Thermiculite 835 filler.

Flexitallic’s Thermiculite gasket material was developed for use in critical services applications, from cryogenics to temperatures in excess of 1000°C. As a result, the use of the Spiral Wound Gasket, combined with Thermiculite, eradicated leaks from the system, therefore preventing future corrosion issues.

Read the article online at: https://www.hydrocarbonengineering.com/special-reports/28042016/overcoming-the-challenges-of-sealing-at-high-temperatures-3152/