Offshore oil and gas facilities are known for their rough environment, which often makes for a burdensome sealing environment. Matching the correct seal can extend seal life and cut down on maintenance – both planned and unplanned.  Thereby optimising production costs for the long term. In the oil and gas industry it is especially vital to comply with industry standards and new sealing materials as they come into the market. By working with a supplier that has an extended offering of compliant materials, oil and gas organisations receive greater processing performance while reducing the number of vendors they need to maintain a fresh supply.

There are several factors leading to the necessity for a proliferation of sealing materials in offshore oil and gas applications. One formulation cannot cope with the differing arduous and difficult sealing environments of the industry; where pressures can be very high, temperatures extreme and in particular, the cocktail of contact and system media can be destructive.

Media faced range from hydrochloric, acetic and formic acids, which are all used during acidizing and fracturing operations, aromatic hydrocarbons such as benzene, toluene and xylene, alphatic hydrocarbons and carbon dioxide as well as several classes of corrosion inhibitors used to prevent corrosion of piping, casing and associated equipment. These substances can lead to sealing materials swelling, losing critical sealing properties or in the worst case being completely destroyed or dissolved.

Beyond dealing with severe chemicals, seal engineering must also factor in the impact of drilling mud, which is very abrasive. Many types exist based on diesel oils, mineral oils, esters or silicates. It is evident that one seal material will not fit all applications and that is why a broad range is essential to make sure that different offshore oil and gas operating conditions can be met in terms of media resistance, life expectation, friction and wear requirements.

Downtime for planned or unplanned maintenance on an offshore platform or FPSO (floating production storage and offloading unit) is a significant cost to the operator and minimising this directly impacts the operator’s bottom line. A key to lowering downtime is to understand how seals will react over time when exposed to severe working conditions. Extending the long-term life of the seals is one priority but ensuring safety is paramount.

As sealing requirements continue to change and become more challenging, new sealing compounds and technologies are being developed to meet these demanding conditions. To ensure safety there must be controls on these new formulations. This has led governing bodies to set standards that can provide the oil and gas industry an unbiased, accurate means to assess performance. More importantly, certifications also provide an added level of confidence that specially engineered seals will meet the toughest requirements.

According to oilfield service companies’ perspective on the various governing bodies serving the oil and gas industry, NORSOK is certainly the most popular – one reason being that it has been about since 2001. The NORSOK M-710 specification underlines the need for oilfield equipment OEMs to achieve higher levels of quality and compatibility for non-metallic seals used in oilfield equipment operating anywhere in the world.

The certifications for NORSOK M-710 have three components to them. Annex A specifies procedures for conducting accelerated aging tests in an autoclave on constrained O-Ring samples. Annex B comprises the fluid compatibility recommendations for the seals. Annex C concentrates on the aging of thermoplastics and addresses explosive decompression resistance. Even though the rapid gas decompression (RGD) resistance test regimes generated by reputable operators such as Total and Shell are highly regarded, the independent qualification of choice for equipment suppliers and fluid sealing specialists is NORSOK M-710 Annex B.

NORSOK M-710 qualification of non-metallic sealing materials and manufacturers (Rev. 2, Oct. 2001) requires that individual seal materials be rigorously tested based on Explosive Decompression Resistance (EDR). This is when gas or gas mixtures that come in contact with elastomer surfaces can be absorbed under pressure. At high pressures, absorbed gas is in a compressed state. When external pressure is reduced, either rapidly or over a relatively short period of time, the compressed gas rapidly expands within the elastomer. This can lead to cracking within the body of the elastomer. These cracks propagate internally and this can cause void formation or cracks to appear on the elastomer surface, which greatly reduces seal integrity.

The other tests conducted encompass sour and sweet gas aging, compression set tests, and material property tests. There are defined requirements for critical non-metallic (polymer) sealing, seat and backup materials for permanent use subsea, including well completion, trees, control systems, wellheads, valves and even topside valves as in critical gas systems. Additionally there are always new revisions evolving in accreditation requirements today that have changed from previous ones such as the newer NORSOK standard certification to encompass all individual components within an assembly rather than just the complete assembly.

In addition to NORSOK, standards from NACE (National Association Corrosion Engineers) and the American Petroleum Institute (API) are equally as influential.

NACE uncovered that with seal procurement, there have been multiple cases of failures caused by permanent compression sets of O-Rings and cracked energising springs and so deemed it necessary for specific certification for seal suppliers. The standards organisation has recently developed test protocols aimed at defining elastomeric seal materials that can avoid damage during decompression in high-pressure gas duty. There are four such protocols set forth for practical seal selection in this type of aggressive oilfield service.

The American Petroleum Institute (API) maintains more than 500 documents that apply to many segments of the oil and gas industry; from drill bits to environmental protection. API standards advocate proven, sound engineering and operating practices and safe, interchangeable equipment and materials.

The API has recently converted the 10423 ISO specification, the perennial governing body that relates to the certification of a completed oilfield piece of equipment such as with a gate valve.  The entire gate valve will be tested and approved by API and the seals will be part of the gate valve that received certification.

In addition to NORSOK, NACE and API standards, there is also Total and Shell.   Each of these governing bodies have worked closely with seal suppliers and played an instrumental role in releasing newer standards on how a sealing material should act and work in an oilfield environment.

Meeting standards with suppliers is key to advancing offshore operations

Achieving compliance to all relevant standards is demanding, time consuming and expensive. This means that not every supplier has the resources to undergo the required certification. It is however vital that suppliers have this certification and the wider the range of certified sealing materials and solutions offered, the less suppliers an operator need deal with to fulfill specifications for varying oilfield sealing requirements. Choosing the correct seal supplier can be critical in ensuring safety, minimising down time and lowering overall cost of offshore oil & gas operations.

This is supported by a report from analysts Frost and Sullivan in which they state that from a strategic standpoint, it is important to partner with an oilfield material supplier that has long been committed to the provision of solutions for the upstream and downstream oil and gas industries. They also state that it is important that suppliers invest in R&D; in having facilities and analytical laboratories that are equipped with state-of-the-art equipment and technology.

Look for a supplier that regards itself as best in class in terms of its material development, testing and the range of sealing materials that it can offer compliant to the most important sealing standards. It should have a large selection of fully approved NORSOK M-710 materials in a range of types. An added bonus is material samples that have been pre-tested for temperatures and fluids by an independent third party to API as well as NACE standards.

Suppliers that can offer a broad range of sealing materials to meet the varying industry standards can help operators optimise their production by allowing the correct material to be specified specifically to oilfield conditions. This extends seal life, reducing planned and unplanned maintenance and ultimately reduces total cost of processing for the operator.

Read the article online at: https://www.hydrocarbonengineering.com/special-reports/22082014/meeting-offshore-oil-and-gas-seal-standards-for-optimum-results/ 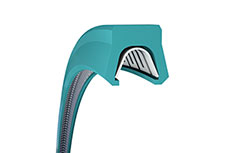