Two critical considerations are on managers’ minds when they invest in blast-resistant structures for a given work area: structural integrity and personnel safety. 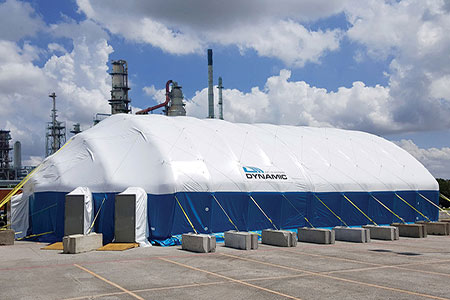 That is why the standard regulatory guidelines, API Recommended Practices, outline ways to improve structural integrity and safeguard personnel. But which structures are the best for your crew and equipment? Dynamic Air Shelters set out to answer this question in numerous live field explosions from 1.8 to 11.5 psi, comparing the structural integrity of previous tests on temporary rigid-framed structures to that of Dynamic Blast Resistant Air Shelters.

The most important feature of a blast resistant structure is the ability to absorb blast energy without causing catastrophic structural failure. Structural failure is one of the predominant factors in injuries and fatalities associated with plant explosions. In theory, any blast resistant structure designed to the relevant overpressure and impulse criteria should protect its occupants from the effects of explosion blast waves, but does this happen in practice?

In 2006, researchers D. V. Ritzel and J. Crocker conducted a series of blast experiments to test metal-framed hemi-cylindrical tents, a type of temporary rigid-framed structure commonly used in camps and permanent facilities for military forces. These included full-scale blast field trials, blast tube testing, and computational modeling. They found these structures to be compromised by “relatively weak blast loading to the side (that is, conditions which would be survivable by personnel in the open),” leading to structural failure and high-acceleration of the tent framework and debris likely to cause injury.

However, when a blast wave reaches a Dynamic Air Shelter (DAS), the response differs dramatically. First, the facing wall flexes, resulting in distortion of the shape of the structure. The bulk of the energy travels through the inflated support columns and down to the ground on the other side. The structure flexes under blast loading, and rebounds following load removal. In one test, the shelter’s arched ceiling deflects inwards, but not by enough to unseat a crash test dummy that had been placed in a chair against the shelter wall. The result for any occupants inside the shelter during a blast event would be a significantly less traumatic experience than in a rigid-framed shelter.

In a series of field tests at the Defence Research and Development Canada (DRDC) Suffield Research Centre in 2009, a DAS shelter was subjected to three successive blasts of increasing magnitude. The first gave an incident side-on overpressure at the shelter of 1.8 psi and positive phase duration of 24 ms, the second gave 3.0 psi at 400 ms, and the final 5.9 psi at 36 ms. Deflections of the wall within the habitable space were negligible in the first case, rising to just 4% in the third and largest trial. The shelter fully rebounded to its original shape after each test, with minor, non-structural seam damage noticed after the third and final test. Inside the shelter, the blast intensity was reduced in terms of overpressure and impulse, while the rise time was extended.

All DAS products have built-in redundancies to be fail safe in the unlikely event of a failure, with no rigid components to collapse. This means that potential structural collapse is significantly reduced and injury to personnel is almost entirely eliminated. This allows for closer proximity to work sites with significantly reduced risk, simultaneously saving time and increasing safety.

DAS structures offer improved safety for occupants during a blast, coupled with rapid deployment and relocation. They can also be designed and specified for toxic shelter in place, fire resistance (external thermal radiation), and hurricane-strength winds. They can meet short-term as well as long-term needs for occupied shelters in hazardous locations in accordance with API Recommended Practices.

Read the article online at: https://www.hydrocarbonengineering.com/special-reports/01032017/blast-resistant-designs/

The Tank Storage Association (TSA) has launched two new careers guides and career profiles to inspire the next generation of talent.