Just three years after launching it to the market, MAN Diesel & Turbo can announce orders for 20 units of its Refinery Train Package (ReTPac). Tailored specifically to the requirements of refinery operators, the modular and scalable turbomachinery concept combines centrifugal compressor and prime mover to a single-lift unit, serving refinery applications like hydrotreating and hydrocracking. 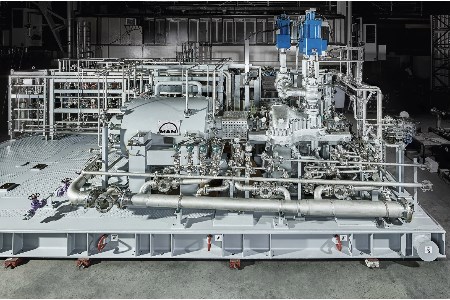 “With development of the Refinery Train Package, MAN has responded early to market perspectives of refinery operators,” said Dr Uwe Lauber, CEO and Chief Technology Officer at MAN Diesel & Turbo. “Bearing in mind the volatility of the price of oil, the refinery sector increasingly requires flexible solutions that enable operators to implement their investment decisions quickly. As an efficient and scalable machinery concept with short delivery times, ReTPac precisely meets these requirements of our customers and is opening up the turbomachinery market for refinery applications.”

The latest order comprises several trains that will be delivered to a refinery in Middle East. Commissioned by a leading European EPC company, the MAN Refinery Train Packages will here be deployed for the process of hydrotreating and so enable the production of ultra low sulfur fuels. As a result of more stringent environmental regulations, these fuels are increasingly in demand across the world.

In the same context, MAN’s machinery concept has also been ordered for refineries in Asia, as well as Central and South America. “As a prime example, our ReTPac design will support the efficient production of ultra low sulfur fuels in a refinery in Southeast Asia from the end of 2016,” stated Peter Klotzsche, Head of Sales & Contracts for the ReTPac concept. “Specifically developed for processes such as hydrotreating, hydrodesulfurisation and hydrocracking, the modular concept can be tailored to individual requirements in terms of CAPEX and OPEX.”

In addition to the orders mentioned, MAN Diesel & Turbo is currently negotiating with several other EPCs.

Read the article online at: https://www.hydrocarbonengineering.com/refining/19102016/man-diesel-turbo-turbomachinery-concept-recaptures-market-for-refinery-applications/

The STRATCO alkylation unit at the Sinopec Qilu refinery in Zibo, Shandong Province, China, has successfully completed its performance test.