After years of development and testing, SoliQz is ready to officially put its innovative experimental facility for the purification of chemicals into operation. The company, which is based in PlantOne in the port of Rotterdam, will commence operations on 13 October. 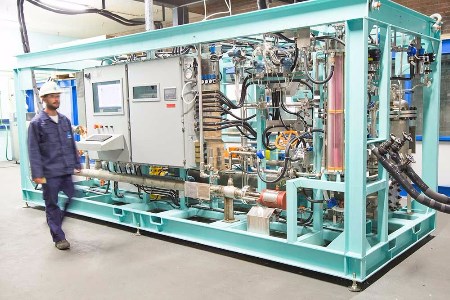 SoliQz will provide an innovative solution for the final stage of the process. SoliQz’s systems purify chemicals on the basis of crystallisation and the ‘Hydraulic Wash Column’ (HWC). This technology, which was developed by the Netherlands Organisation for Applied Scientific Research (TNO), is used to remove the last impurities of the chemicals by means of hydraulic pressure. Chemicals can therefore be purified to a degree of 99.9% using a minimum of 20% and a maximum of 90% less energy relative to distillation.

In recent years TNO, and later SoliQz, a spin-off of TNO, carried out over 50 small scale pilot projects for customers and delivered two commercial – or semi-commercial – plants. The technology is now ready to be launched commercially on a large scale and operations will soon commence in PlantOne. The experimental facility was made possible by investments of the American company Armstrong Chemtec.

A major advantage of HWC technology is its scalability. The feasibility studies will therefore be carried out in the laboratory in PlantOne, as will the validation tests in a pilot context. After this work has been completed, it will be possible to build the purification systems at a customer’s location and put them into operation on a fully industrial scale according to the specific needs of the customer.

SoliQz CEO Nicolaas Viets explained that: "PlantOne is an ideal location for us. It allows us to make use of the 'umbrella permits and licences' that the location has already been granted and we will also benefit from the logistical and operational support available. In addition, which is just as important, we’ll be close to our customers in the heart of Rotterdam’s petrochemical industry."

Read the article online at: https://www.hydrocarbonengineering.com/petrochemicals/18102016/soliqz-opens-experimental-facility-for-high-purity-chemicals/

In its ‘International Energy Outlook 2021’, the EIA projects that energy-related carbon dioxide emissions will rise over the next 30 years.