Petrochemical markets in Asia have reacted swiftly to recent rising crude oil and naphtha prices but European and US markets are still feeding through the sharp crude price downturn of the past six months, ICIS data has shown.

The ICIS Petrochemical Index (IPEX), which represents a capacity-weighted basket of 12 primary petrochemical products, fell 1.5% in February from January 2015. The index is down 37% from February 2014 and 36% lower than in August 2014 when crude oil prices began to fall dramatically. 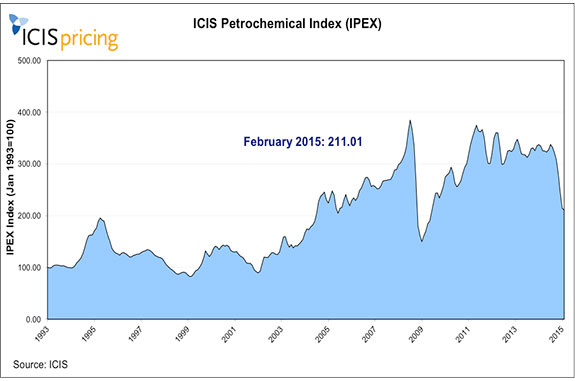 Crude prices began to drop in August last year and have prompted steep falls in the price of the petrochemical industry’s primary liquid feedstock, naphtha. The rally in crude prices, however, which began at the end of January 2015 has yet to feed fully in to prices for the major petrochemicals given the time lag for costs to pass along the primary petrochemical product chains.

Spot price-driven markets in Asia reacted quickly to the uptick in crude in February. The sharpest increases were in prices for propylene, ethylene, benzene and their derivatives. Contract paraxylene prices continued to fall in an over-supplied market. Paraxylene is a feedstock for the polyester cloth and polyethylene terephthalate (PET) bottle industry.

Petrochemical price movements in the US were mixed although prices rose for products most directly linked to oil. Ethane and other natural gas liquids (NGLs) predominantly produced from shale gas are the preferred feedstock for many petrochemicals in the US. Prices have been lower since the second half of last year and in February were in the 16.50 to 20.50 US cents/gal range. The chart of the US IPEX, WTI and Henry Hub natural gas prices illustrates the cost advantage that US petrochemical producers cracking ethane can achieve. (Ethane prices in the US are related to those for natural gas). 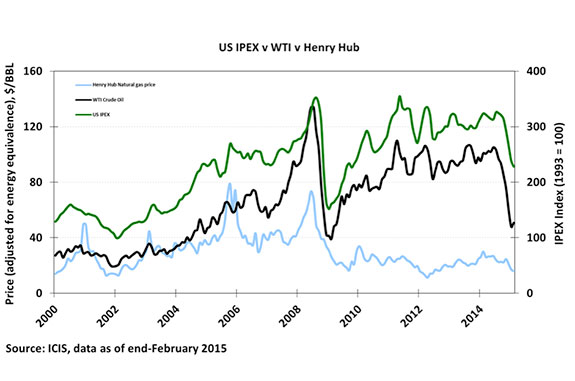 Petrochemical prices in Europe have been falling with lower crude and lower naphtha costs and generally continued to drop in February, often significantly. Prices for some commodities rolled over in the quarter in euro terms but were lower in US dollars.

Europe ethylene and propylene prices dropped by more than the equivalent of US$100/tonne in February. Polyolefin prices fell by a greater amount. At the end of January, Europe spot pipeline ethylene prices were at a five year low.

Naphtha prices in Europe in February were US$511/tonne on average, 44% lower than in February 2014. 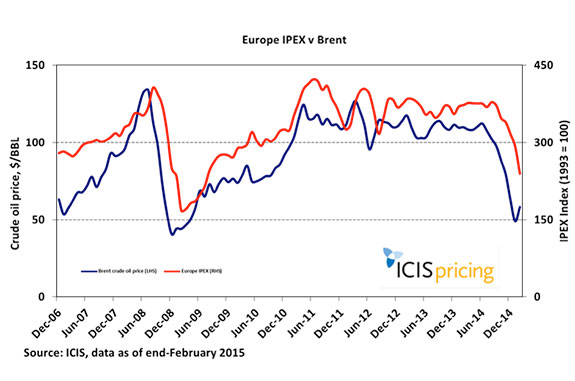 Read the article online at: https://www.hydrocarbonengineering.com/petrochemicals/12032015/ipex-petrochemical-plastics-markets-429/