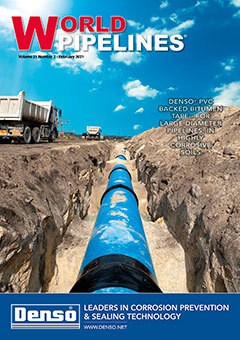 The Nord Stream 2 gas pipeline project (NS2) faces mounting opposition, just as the final pipes are being laid. NS2 is the second phase of Nord Stream, which takes Russian gas directly to Germany via the Baltic Sea, bypassing Poland and Ukraine (turn to p. 34 for an in-depth look at Ukraine’s place in the global gas sector). As of 1 February, NS2 is over 90% complete, with only 148 km of pipeline still to be laid on the seabed.

In January, members of the European Parliament called for EU states to sanction Russia, following the alleged nerve agent attack on – and recent detention of – outspoken Kremlin critic Alexei Navalny. This brings Germany under pressure to halt the construction of the pipeline amidst escalating EU-Russian tensions. In a non-binding vote, MEPs called for the EU to “immediately prevent” the completion of the pipeline project, while demanding Navalny’s release from jail.

Meanwhile, US President Joe Biden is expected to continue the work of his predecessor, former President Trump, in making policy that opposes NS2. On his last full day in office, Trump imposed sanctions on a pipelaying ship being utilised for the project (the Russian ship, Fortuna), and the US Department of State had previously updated its guidance regarding the applicability of secondary sanctions against parties who invest directly in and/or sell, lease or provide goods to the Russian Federation for the construction of energy export pipelines. Biden has called the pipeline a “bad deal” for Europe in the past.

Despite the noise from the European Parliament and the US, the German government has reiterated that it does not plan on abandoning the project, despite the recent geopolitical developments. “There is no direct connection between the Navalny case and Nord Stream 2,” government spokesman Steffen Seibert said in Berlin on 25 January. German Chancellor Angela Merkel is expected to discuss the project with President Biden in the coming weeks; the two world leaders will certainly disagree on what the project means in global terms. Merkel has always maintained that NS2 is a business deal and nothing more. She has pursued a ‘business first’ agenda when entering into investment or manufacturing deals with countries such as Russia and China; something that won’t sit well with Biden. Merkel is the outgoing Chancellor, having stated that she will not seek a fifth term of office in 2021. The (rumoured) favoured candidate to replace her as head of the CDU is Armin Laschet, a Russophile. He has repeatedly warned against a supposed ‘demonisation’ of Russia and an ‘anti-Putin populism in Germany.’ Of course there’s a precedent here: Merkel’s predecessor in the role of German Chancellor, Gerhard Schröder, is a Director at Nord Stream and also Chairman of Russian state controlled oil giant Rosneft. Can you hear Biden gnashing his teeth?

I hope you enjoy this issue of World Pipelines, which includes a fascinating article from NuGen Automation (USA) on the risks posed by the public disclosure of sensitive pipeline data and information (p. 19). The article highlights the importance of protecting pipeline information from the US Freedom of Information Act and discusses many facets of pipeline operation, including control room security, incident response, confidential personnel information and integrity management. And for more on integrity management, join us for a virtual conference, Integrity 2021, on 28 and 29 April. Sign up for free at worldpipelines.com/integrity2021.

Get your free issue of World Pipelines