Lawyers representing the victims of a massive ecological disaster caused by Chevron’s oil explorations in the Amazon rainforest have called on the company to end its reckless campaign to sabotage the Ecuadorian court system.

In a document submitted to the Ecuadorian court yesterday, the victims also proposed that the court give Chevron and the Amazonian communities a final opportunity to submit material that could assist the court in deciding the case.

“This case is being litigated in Ecuador because Chevron fought to have it moved here from the United States,” said Steven Donziger, a lawyer for the victims. “But instead of defending the case, Chevron has waged war against the legal system, alleging fraud while essentially boycotting the proceedings. Their reckless and improper tactics must stop.”

Donziger said it was ironic that Chevron has attacked the expert report concluding the company is responsible for more than US$ 27 billion in damages because, from the outset, Chevron has refused to participate in the expert’s assessment. Donziger called on the company to submit material to aid the court in reaching its final decision, which is expected soon.

In their submission, the victims said that, “even though Chevron failed to participate meaningfully in the damages assessment process in the past, [the victims propose] giving both parties the opportunity to submit this supplementary information will satisfactorily resolve the outstanding controversy … and thereby permit this judicial proceeding to have a normal development leading to the issuance of a final ruling.”

“Because of the catastrophe in the Gulf of Mexico, which has yet to reach the proportions of the vast amount of oil contaminating the Amazon, it’s apparent that cleanup costs can be very large. So it is possible that the US$ 27 billion amount in the expert’s report may be insufficient to remediate the harm in Ecuador,” Donziger said. “Under these circumstances, it’s appropriate that both parties be given one last chance to submit information to the court.”

Chevron has actually admitted to discharging more than 18 billion gallons of toxic ‘produced water’ into Amazon waterways and forests from 1964 to 1990, when it was the sole operator of a large oil concession. The contamination has decimated indigenous groups and caused an outbreak of cancer that has accounted for at least 1400 deaths, according to a damages assessment submitted to the court.

The lawsuit was originally filed in 1993 in US federal court, but it was moved to Ecuador in 2002 on a motion from Chevron. To induce dismissal of the case, Chevron at the time submitted 14 sworn affidavits praising the fairness of Ecuador’s courts.  The timing of the court case could not be worse for Chevron though, at a time when big oil companies are increasingly coming under public and government scrutiny, for what many see as reckless behaviour in exploiting difficult oil reserves.

Read the article online at: https://www.hydrocarbonengineering.com/gas-processing/24062010/chevron_accused_of_attempting_to_sabotage_ecuadorian_court_system-/ 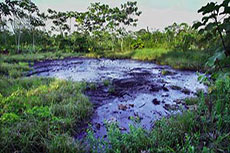 BP’s projected liabilities for the Gulf spill dwarf those of Chevron over its toxic dumping in Ecuador.