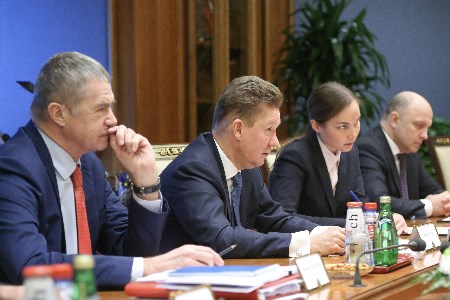 The meeting participants addressed the companies' ongoing cooperation in the gas sector, placing a focus on Russian gas exports to Austria. It was noted that from 1 January through 15 November 2016, Gazprom had supplied Austria with 5.1 billion m3 of gas, up 31.5% versus the same period in 2015. During the 1 - 15 November 2016 period, the exports grew by 118.9%.

The parties also addressed issues related to the asset swap between Gazprom and OMV. Special attention was paid at the meeting to the Nord Stream 2 project.

OMV is the main partner of Gazprom in Austria. On 4 September 2015, Gazprom and OMV signed a Term Sheet regarding an asset swap. If the deal is completed, OMV will acquire a 24.98% stake in the project for developing Blocks 4A and 5A of the Achimov deposits at the Urengoyskoye oil, gas and condensate field in exchange for Gazprom's participation in OMV assets. On 1 April 2016, Gazprom and OMV signed a second Term Sheet regarding an asset swap. The document specifies, inter alia, the assets to be provided by OMV.

Nord Stream 2 involves the construction of a gas pipeline with an annual capacity of 55 billion m3, running from Russia to Germany across the Baltic Sea. In 2015, Gazprom supplied Austria with 4.4 billion m3 of gas.

Read the article online at: https://www.hydrocarbonengineering.com/gas-processing/18112016/austrias-demand-for-russian-gas-continues-to-rise/

Shell has completed the sale of its interest in the Deer Park Refining Ltd partnership, a JV between Shell Oil Co. and P.M.I. Norteamerica, S.A. De C.V. (a subsidiary of Pemex).